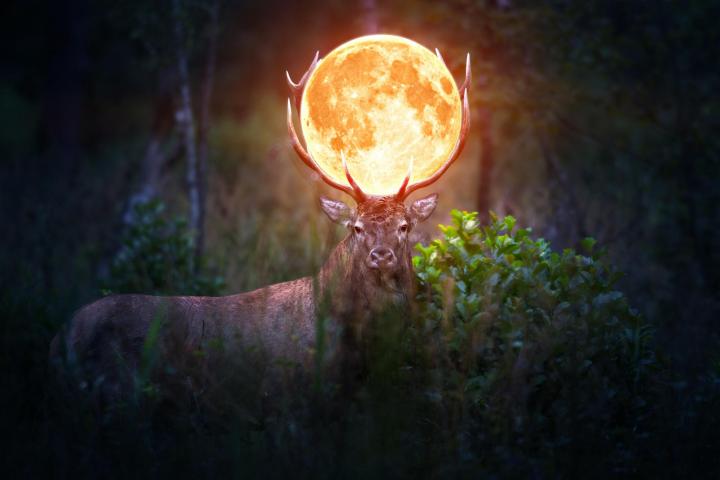 It is said that the full moon in October sets the energetic precedence for the next year. Our last full moon was actually a blue moon with intense energy and it was in the zodiac sign of Taurus. One thing that many fail to research when studying astrology or their own planetary signs is to not look at that polarity of the sign – meaning the opposite of said sign.

When we have a full moon it is opposite the sun, meaning whatever the astrological sign the sun is in the full moon is in the opposite sign. And for the blue moon in October, the sun was in Scorpio and the moon was in Taurus – which are opposites.

While Taurus represents the earth element, Scorpio is water. So the transition energy you get from Scorpio can be grounded in Taurus and can be quite humbling. Scorpio represents change, transition, and transmutation; Taurus is a stable energy and help us keep the calm in the middle of the chaos in our core. Scorpio represents the Underworld as it’s planet is Pluto. While we have the sun, (whose zodiac sign is Leo) representing the self, walking through the Underworld we can expect to have big changes within our lives as well as being forced in front of a mirror and having to work through our inner turmoil or commonly called self inventory.

As we are seeing all of this chaotic energy in our world today, it would appear that the Earth is really feeling this Underworld energy. Transitional energy is in the air, but as we are seeing in our world it is unfocused which sends it out in all sorts of crazy directions. The frustrating thing for those of us that actually work with this energy and see the playing out of energies is that there are others who fail to see or even think astrology is just a new age mumbo-jumbo that isn’t relevant. And people can think what they want, but so far astrology has really energetically aligned with what is going on Earth.

As I was re-reading through one of Barbara Hand Clow’s books, Liquid Light of Sex, I came across a paragraph that hits on this polarity energy – and to me shed some light on this energy. “The second polarity turns around the issues of grounding and emptying. Am I stuck in a house in the midst of a fifteen-year accumulation of possessions and feeling like I can never leave? Or, have I so let go of things I need for living that I am not grounded? Resolution” higher ethical sensitivity. Take for yourself what you really need from the Earth and enjoy all your pleasures. Let go of every single thing in your life that is not frequently needed or used. Teaching: the Native American saying ‘The Earth is your Mother and she freely offers to you all that you need.'”.

As I have stated in my past shows, we are at an apex in our world right now. As with all change comes fear that things will be worse than they are now, but this is when it is important to focus our energy so we can active create instead of tossing the dice and seeing what we get. Remember, the more people focusing on one energetic impression the greater the chances for the result you are seeking. With Pluto and Saturn still hanging out in Capricorn, we will probably keep seeing dirty laundry aired from our governments and other institutions of power. Many fear change and I feel that it is because they have not yet master the process of it. Unfortunately, this is one of many things that were taken away from us about 2000 years ago. We are in the beginnings of the Age of Aquarius and this age is about future thinking, its technology, its forward thinking and wanting to take things to the next higher level. As I write this, the moon is in Cancer but it is still opposite Jupiter, Saturn, and Pluto that are in Capricorn. So while all of these governments and institutions are being turned upside down, it would behoove them to listen to the out cries of the people and work at bringing comfort back to the people they are supposed to represent. Venus and Mercury are in Libra which is really aiding in the energy for clarity and balancing out the energy….as well as fairness. Lady Liberty will not rest until the unjust has been made just and harmony for the people reigns.

Mars is still in Aries retrograde, so we can see that there is a blockage in the forward moving of the energy. It may help us to remember our dreams from the past, or the wishful dreams of a nation to us to be able to go forward harmoniously. I’m not talking about the Utopian pipe-dream, I am talking about meeting middle ground.

Some food for thought!